The job of a play-by-play announcer is to not only paint a picture of what is happening during a sporting event but to add insight and understanding why certain things are happening. At UVU, Matt Baiamonte has been doing this for almost a decade.

Baiamonte’s story began at Pleasant Grove high school in Pleasant Grove, Utah. Early on, Baiamonte knew that his dream was to work full time as a play-by-play voice and have a daily radio show. So he started calling football and basketball games for his school to gain experience.

“When I think of my experience, it’s not typical as a college student to be given play-by-play responsibilities at a university,” Baiamonte said. “I think the reason that door opened for me was because I had hundreds of games under my belt at the high school level.”
Later, while enrolled at UVU and working on a story about the volleyball team for The Review, Baiamonte was notified of the need for a play-by-play commentator for the volleyball games. He seized the opportunity, and has now called over 100 games across five different sports, as a part-time job for the university.

In 2011, he was able to land his first unpaid internship with Greg Wrubell, the radio play-by-play voice for BYU athletics. At the time, Wrubell was working for KSL at the onset of BYU football independence, and Baiamonte had the chance of a lifetime to learn from one of the industry’s best.

After his time with Wrubell, Baiamonte was able to transition into a paid internship with the Utah Jazz broadcast team and the voice of the Jazz, David Locke. During his stint with the Jazz, Baiamonte worked mostly on the opposing teams broadcasts helping behind the scenes.

The job didn’t come without its perks though, as Baiamonte, who grew up a Lakers fan, got his shot to meet Lakers superstar and future NBA Hall of Famer, Kobe Bryant. This is something Baiamonte said he will never forget.

“I got to ask him a couple of questions that ended up being played on the Lakers home channel back in southern California,” Baiamonte said.  His favorite memory of Bryant happened after the media and cameras dispersed.

Baiamonte said he vividly remembered the Lakers public relations worker telling Bryant it was time to leave, but he ignored her to go take pictures and sign autographs for the fans.

“Eventually he made his way to me,” Baiamonte said. “I handed my phone to a friend and we took a picture. This is what I thought was really unique about that moment, because Kobe Bryant is a really polarizing figure and there’s a lot of stories about him being hard to play with and not being a nice guy. In the picture, his arm is around me and he’s smiling and I feel really fortunate as a die-hard Kobe fan that that was my experience with him.” 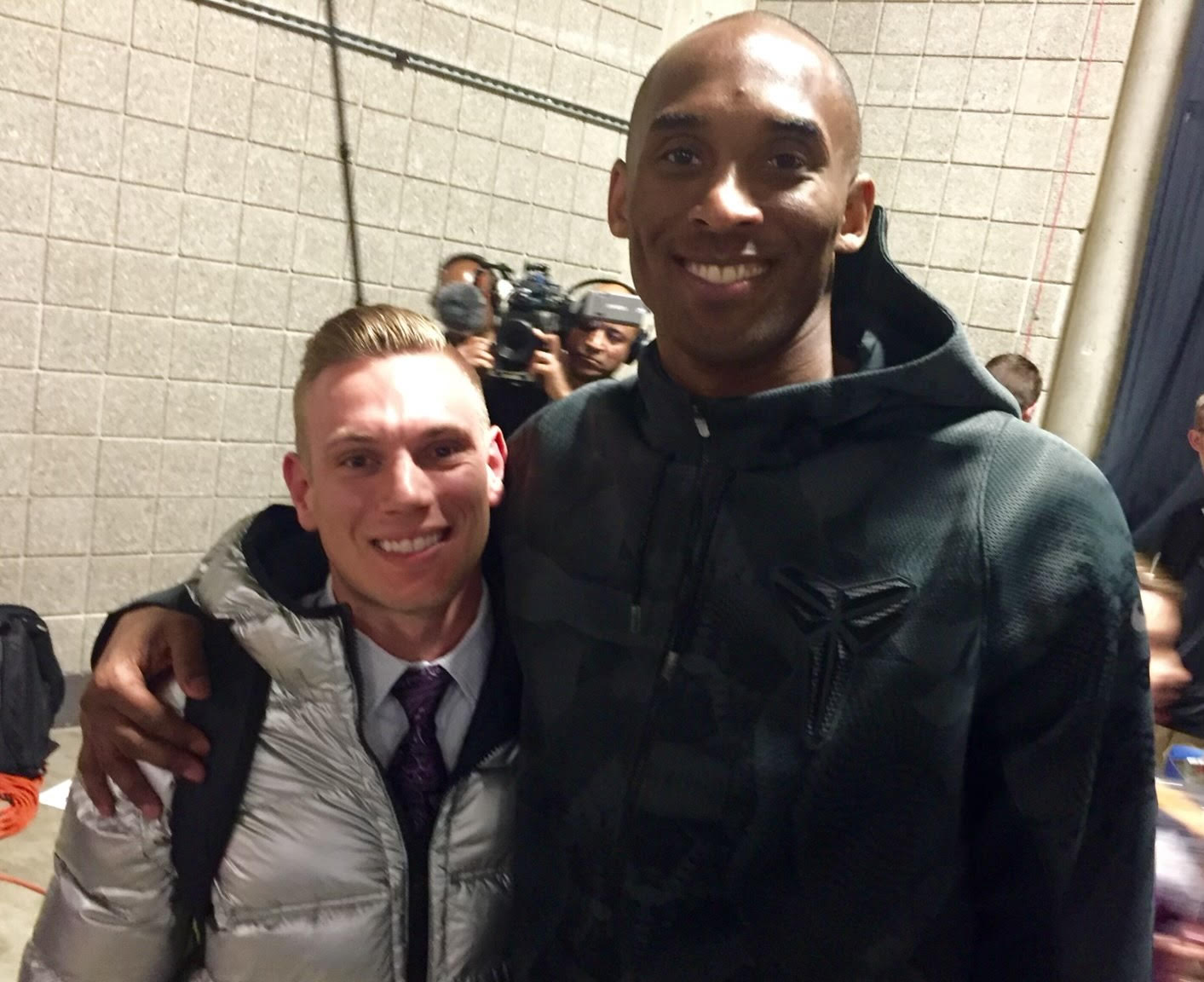 After graduating from UVU in 2013, Baiamonte concluded what would be an eight-year journey to eventually land back at KSL, where he had previously worked his first internship. Baiamonte became a co-host of Cougar Sports Saturday on KSL Radio. He is occasionally featured on KSL’s Unrivaled, a daily sports talk show with Alex Kirry and former NFL quarterback Scott Mitchell.

Baiamonte’s advice to anyone trying to get into the sports broadcasting field is to do exactly as he did.

“I think the best thing they can do is try to get reps at a local high school. High school football and basketball has become much more prevalent in the state of Utah. Then when a door opens at a local university, you will have the experience to get into it.”

As for achieving his own dreams of becoming a full time play-by-play commentator and radio show host? Baiamonte is sure to have that opportunity come knocking, and when it does, he will be ready.

Brice Larson is currently a Junior at UVU majoring in communications with an emphasis in journalism and media studies. He enjoys everything about sports and one day hopes to become a college football analyst and play by play commentator.

Wolverines use three-run seventh to vault past USU 3-2

Graduation coming up and more! – Newsbeat

Spring sports excitement peaks despite the end of the semester

Wolverines win it all in the 7s Tournament championship