UVU: The Toast of The United Nations 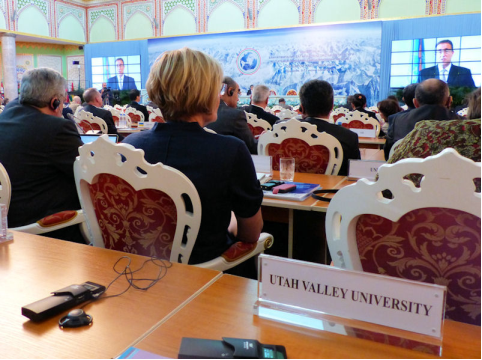 UVU gets exclusive invite to U.N. conference in Tajikistan

UVU was the only university in the world that was invited to the June United Nations conference in Tajikistan.
Rusty Butler, associate vice president of International Affairs and Diplomacy at UVU, and Jack Schmidt, a professor and researcher at Utah State University who specializes in watershed sciences, went to the conference to represent UVU.
“We were officially greeted by the president of Tajikistan. The U.N. knows who UVU is,” said Butler.
The U.N. conference dealt with global water issues and due to Utah’s dry climate Schmidt and Butler were able to share a unique perspective on how water irrigation could help the world.
This isn’t UVU’s first time at a U.N. conference.
According to Butler, UVU has been establishing close ties to the U.N. for over a decade. It started when Butler was in Washington D.C., where he met ambassadors who were interested in coming to Utah to teach. Under Butler’s guidance UVU started an aggressive Model U.N. program that brought students to the U.N. General Assembly in New York every year. UVU’s Model U.N. program consistently brings in more ambassadors to UVU than any other school outside of New York.
Butler said at a previous U.N. conference an ambassador confided, ”The word is out at the U.N. that if you get invited to Utah to visit UVU, you go.”
Perhaps this is because UVU provides visiting ambassadors with a first class experience. Through the use of private donations, ambassadors are flown to UVU to experience its learning environment, to make friends and to forge alliances.
“The ambassadors are treated very well and we often help them make a holiday of their trip by having them bring their families and see the sights,” said Butler. “At one point the ambassador of Israel wanted to go to a national park while she was in Utah, but didn’t have enough time.”
He said UVU was able to fly the ambassador out for a quick visit to a national park with the help of UVU’s aviation program.
“We’ve got a great program going on, and it has really helped UVU get out into the community and the world,” Butler said.