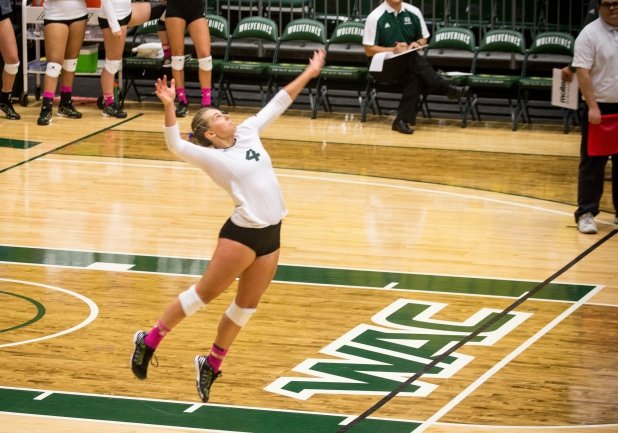 OREM, Utah—The Utah Valley University volleyball team continued conference play as it took on the University of Missouri, Kansas City Kangaroos, Saturday, Oct. 1, at the UCCU Center. This match proved to be important for both teams, as both records are similar: UVU sat at 5-11, and UMKC sat at 8-7.

The second set was a bit less aggressive from the Wolverines, having won with a score of 25-23. Even with the ‘Roos pulling a close score, the Wolverines managed to have duplicate stats from the first set, keeping up a hard fight.

The next half of the match demonstrated a fight for UVU, as the Wolverines lost the 3rd and 4th sets. Both scores came out as 25-19, in favor of the ‘Roos. Although they lost both sets, the Wolverines played incredible offense with combined team assists of 26 for the two sets, 24 of which came from Sierra Starley.

What seemed would be an early finish for the Wolverines, went into a nail-biter fifth set. Set 5 proved not to be a disappointment, however, with constant, non-stop action. The teams went back and forth with the score with seven ties throughout the set, as they kept the drama high and the suspense lasted to the last second. UVU eventually took the set with a final score of 17-15.

The emotions ran high with a tie score of 15-15. UMKC had a block that would have helped secure their win. However, the referee announced the block was illegal as the ‘Roos blocker was on the net. The foul put UVU ahead and the final point came immediately after and closed out the match.

“I was really excited about the energy and the execution in the first couple of sets. Especially the first set, I thought that they really dominated. I was really proud of them being down in the second and being able to make that comeback,” said UVU head coach Sam Atoa. “We made too many errors in those last two sets, and we just got out of our element somehow and just didn’t execute very well. I was proud after not having the momentum in the fourth set and being able to control right from the beginning in the fifth set.”

UVU looks to keep their streak alive by taking on Seattle U at home on Saturday, Oct. 8. The game will be played at Pleasant Grove High School at 1 p.m. MT.