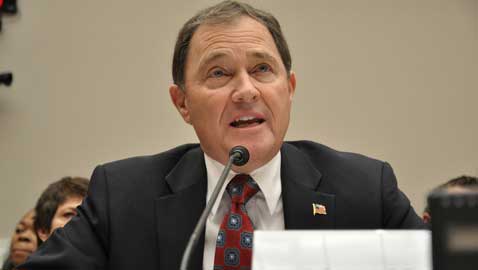 Students crowded into the main chapel at the LDS Institute of Religion to hear the governor of Utah speak on Sept. 16.

Herbert is the 17th governor of Utah and under his leadership, Utah has been recognized as one of the best managed states in the U.S. and has also been labeled with the best quality of life. However, Herbert took no credit for the proud titles proclaimed about Utah.

“It is an honor to be governor of such a great state with so many great people,” Herbert said.

You can make a difference in more of a dramatic way than you can comprehend.

Amid many jokes and lighthearted comments, Herbert began his tips for success.

“We all need ideals. Maybe to be more Christ like or to be more rounded and well-balanced,” Herbert said. “This gives success when we have worthy ideals.”

The first tip Herbert suggested to reach success in life is to get a good education. “Education will unlock the door of success for you,” Herbert said. “Take advantage of every educational possibility that you can.”

In the U.S., the unemployment rate for people with a bachelor’s degree is only about four percent. “If you want a good job, get a good education,” Herbert said.

The second tip for success, according to Herbert, is to learn how to work hard. He spoke of how his father was raised on a farm in Idaho during the Great Depression, and how he had to learn to work hard in order to help support his family.

Herbert admonished students that “society doesn’t owe you anything. Go out there and work.”

The third tip for success was to serve other people.

“If you are going to be successful in life, you need to make service a part of what you do,” Herbert said. “Service is the rent we pay for the space we occupy here. We need to give back. Be an angle for someone else.”

Herbert talked about how Utah is the number one state for volunteerism in the U. S. Nearly 50 percent of Utahns volunteer for something, and Herbert thinks that it has made an impact on our state.

The final tip for success given by Herbert was to resolve to make a difference.

He told a story about Ryan Earljack who, as a young boy, began saving money to help build wells in African countries. Today, Ryan has developed a foundation and built over 680 wells in 16 different third-world countries.

“You can make a difference in more of a dramatic way than you can comprehend,” Herbert said. “You are the leaders of tomorrow. Are you ready? I believe you are.”