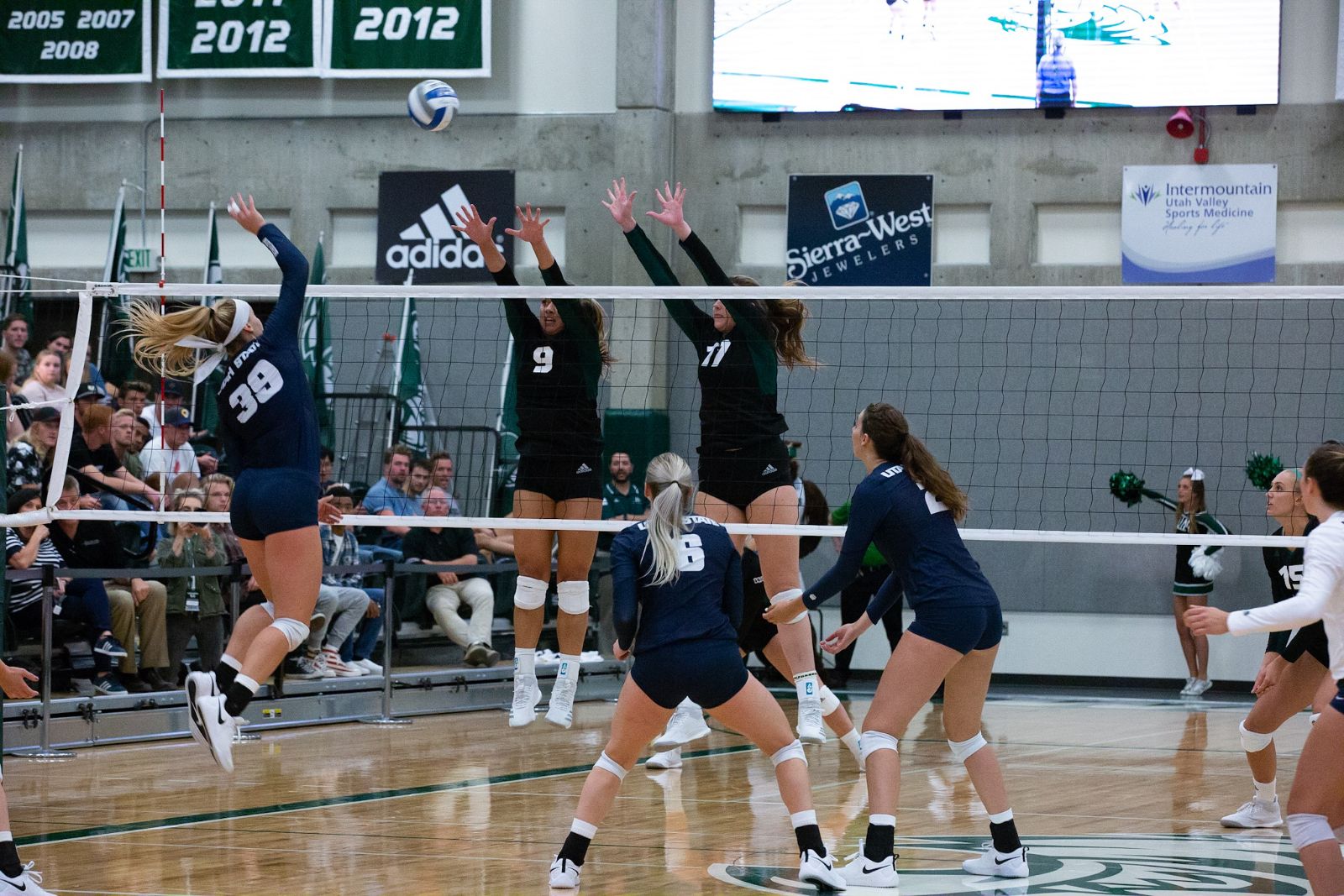 Taking advantage of an enthused home crowd at Lockhart Arena, the UVU volleyball team was able to defeat their in-state rival, the Utah State Aggies, in all three sets Sept. 4.

“It’s awesome when you come in and already, we had several of our students in their seats before the whistle,” said head coach Sam Atoa. “It was great to be able to have that. It was fun to be able to see them be here and support what we were doing. It was a fun evening and it was great for us to be able to end it on top.”

In the first set, UVU got off to a slow start, initially trailing 7-1. However, the Wolverines fought their way back into it, eventually tying the game 17-17. From there, they continued to build on that lead until they ultimately sealed the comeback with a 25-21 win. Freshman Kazna Tarawhiti led the team with six kills and Jaysa Stratton, who previously played for Utah State, added seven assists against her former team.

“I think at the beginning, we got a little frazzled,” said Tarawhiti, who recently was awarded All-Tournament Honors for her impressive performance at the Oregon Classic. “But we got our heads focused and figured it out by the end.”

The second set started similar to the first, with USU again jumping to an early lead. However, UVU rallied behind a series of blocks and a big hit from senior Alexis Davies to pull ahead 9-8. From then on, they were able to hold out and claim the victory with a final score of 25-20. Davies finished the set with four blocks. Kristen Allred, who also received All-Tournament Honors at the Oregon Classic, ended with five kills.

The final set played out much differently, this time with UVU dominating from the beginning. The Wolverines started out ahead 12-3 and only increased that margin from there, cruising to a 25-9 blowout. Tarawhiti had another six kills, Madi Wardle came away with nine assists and Seren Merrill had 11 digs for the Wolverines.

“In that third set, I felt like the [women] made some good reads and controlled the ball and made very few errors,” said Coach Atoa.

The win tied UVU’s all-time record against USU at 8-8 and moved their season record for this season to 5-3. Their next in-state game will be another home match against Weber State on Sept. 11.