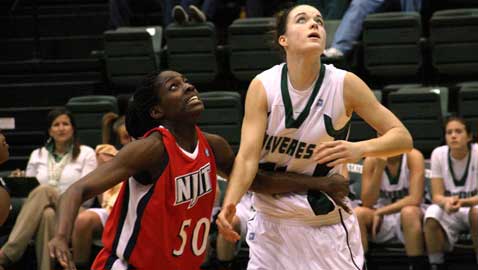 For the first time all season, the UVU women’s basketball team was inconsistent in a good way.

The reserves jumpstarted the Wolverines in the first half before giving way to the starters in the second, combining to give UVU a 63-52 win over NJIT in the Great West Tournament semifinals. Newly minted conference Player of the Year Sammie Jensen converted consecutive and-one baskets in the final minutes to help stave off a final push from the Highlanders.

“In the first half it was one group, in the second half it was a different group,” head coach Cathy Nixons aid. “I thought our depth really worked to our advantage tonight.”

The Wolverines got a boost from three players who had were key in their 2010 tournament run, two of them now part of a suddenly deep UVU bench. Jenna Johnson, relegated to reserve role late in the season, scored a game-high 18 points, eight of them coming in the game’s early stages.

The most unexpected help came from reserve Kaycee Mansfield. Another former starter, the junior forward played 29 minutes Friday night after playing a combined 28 minutes in the three previous games. She notched nine points on a perfect 4-of-4 shooting from the field and added nine rebounds, a steal and a block on the night.

For Mansfield, it was a welcome return to a more productive period of her career. In the 2010 the then-freshman logged two double doubles during the Wolverines’ three-games-in-three-nights marathon.

“It just felt like old times, just doing what I do,” Mansfield said. “It seemed fun, easy, just playing how we play every day in practice.”

UVU appeared in danger of duplicating more recent times, allowing a double-digit lead to be cut to four after back-to-back 3-pointers from the Highlanders. NJIT made a similar comeback in the teams’ last regular season meeting in Orem, thanks in large part to the Wolverines’ inability to score for a large stretch.

Jensen didn’t allow a repeat, driving hard to the basket and scoring two possessions in a row. Both times she was fouled, and the free throws formed a game-clinching 6-0 run.

Nixon admitted the team has been waiting for Jensen to show the crunch-time assertiveness she exhibited Friday night.

“We kind of joke that once Sammie learns that she can do that more often, she probably would,” Nixon said. “She sure picked a timely spot to do it. I just loved it.”

“The lanes were open, I didn’t want to lose and it was a good opportunity,” Jensen said. “I didn’t force anything. I just took the opportunity that was given to me.”