Volleyball falls to UTRGV in second round of WAC Tournament 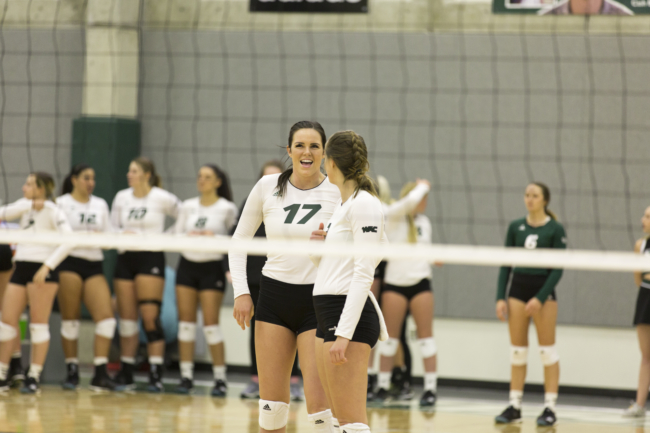 After a victory over UMKC in the opening round of the WAC Tournament last time out, the No. 3 seeded UVU volleyball team faced off against second seeded UTRGV in second-round action Friday in Edinburg, Texas. Despite a tooth and nail battle the entire way, the Wolverines came up just short in this one, falling to the Vaqueros in four sets (27-29, 25-21, 24-26, 21-25).

UTRGV came out hot in the opening set, scoring on three consecutive plays to open up a 3-0 lead early on before the Wolverines were able to respond. The Vaqueros lead slowly grew over the course of the set, eventually peaking at six when a UTRGV kill made the score 14-8. On the ensuing play, Madison Dennison scored a kill that kicked off a 4-0 UVU run that pulled the Wolverines to within two at 14-12. Several moments later, after the Wolverine deficit had grown back to five, UVU scored on a Vaquero error and reeled off six straight to take its first lead of the set at 21-20. The final moments of the set were tenuous, as both sides traded scores until battling to a 27-27 tie. A pair of back-to-back Vaquero kills closed out the first set as UTRGV held on for a narrow win.

After conceding the first point of the second set, Brighton Taylor recorded a kill as the Wolverines scored three in a row to take a 3-1 lead. The Vaqueros responded with a 5-0 run of their own to take a three point lead at 6-3 before a Dennison kills broke up the scoring streak and initiated a 7-2 run, giving UVU a two point lead at 10-8. Moments later, UTRGV was able to tie the score at 12-12 before taking back the lead on the next play. After several moments of back-and-forth scoring, the teams found themselves once again deadlocked at 16-16. Back-to-back kills from Dennison and Lexi Thompson fueled a 5-1 UVU run that made the score 20-16. A late comeback attempt by the Vaqueros was stamped out by the Wolverines, who were able to close out the second set and record a win.
The third set began as had the second, with UTRGV scoring first before three consecutive kills, two from Dennison and one by Sierra Starley, gave the Wolverines an early 3-1 lead. The Wolverine lead bounced from one to two until a Vaquero kill again tied the score at 8-8. Ten ties and three lead changes later, and with the score knotted at 20-20, Lexi Thompson recorded a kill and a block on the subsequent play to give the Wolverines a late 22-20 advantage. The Vaqueros were able to respond with a 3-0 run before a service error tied things up again at 24-all.

With the set on the line, UTRGV came up with a pair of clutch kills to steal a third set victory and take a 2-1 lead.
Looking to avoid elimination, the Wolverines came out motivated in the fourth set, scoring three straight to take yet another early lead. UTRGV responded with four straight scoring plays, and then a Kristen Allred kill tied things up at 4-a-piece. Several moments later, with things all square at 7-7, UTRGV tore off an incredible 9-1 scoring run, the largest of the match, to take a commanding eight point lead at 16-8. Powered by a pair of kills from Megan Boudreaux, the Wolverines were able to cut into the deficit over the proceeding moments as they pulled to within five at 18-13. Several plays later, two more Dennison kills highlighted a six point scoring streak by the Wolverines to narrow the deficit to just two at 23-21. That’s as close as UVU would come in this one however, as consecutive UVU errors ended the set, giving UTRGV the match.

With the loss, the Wolverines are eliminated from the tournament. UTRGV will move on to face CSUB Saturday in the championship match.

The final game of the season marks the end of several illustrious careers, as this year’s team features five seniors who will be moving on.

“It’s hard to talk about these seniors because of how hard they’ve worked and how much they mean to me,” said head coach Sam Atoa in a statement to GoUVU.com. “We’ve had our challenges and battles over the years, but it’s been just been a delight to be able to coach each one of them.”

Dennison paced the Wolverines with a career high 20 kills while also adding seven blocks, while Starley contributed with 45 assists.