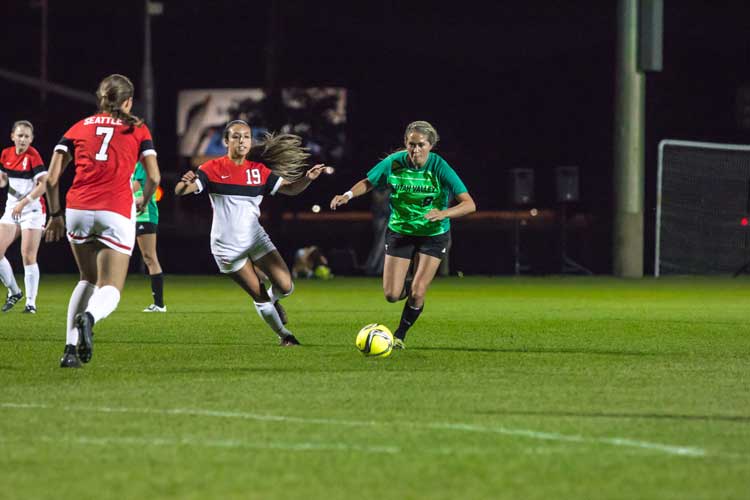 The Utah Valley University women’s soccer team will make the short trip down University Parkway to take on Brigham Young University in the first round of the NCCA Tournament at South Field on Saturday, November 14, at 1 p.m.

BYU head coach Jennifer Rockwood is no stranger to the NCAA Tournament with her team making their fourth consecutive trip.

“Always very excited,” said Coach Rockwood. “I think that’s what we all shoot for in August.”

With a strong defensive identity, BYU tallied 13 shutouts on the season. The Cougar offense has struggled to score this season having netted just 31 goals on the season, with nine coming in the last three games.

“Defensive presence and pressure has always been our number one priority,” said Rockwood. “It’s always been that way with our program. Some years we score more goals than others, but it’s always a consistent emphasis, high pressure.”

The Cougars will pose a tough opponent for the Wolverines having finished with a 15-2-2 record overall, including a perfect 10-0 at South Field.

“We’re very excited and we know we’ve got our work cut out for us,” UVU head coach Brent Anderson said. “We’ve got a few days to prepare so we’ll get out there and try to clean a few things up from the tournament and prepare for BYU.”

After a rocky start, UVU found their stride at the season’s midpoint and managed a strong finish to the season by winning nine of their final 11 matches, including two shutouts in the WAC Tournament.

“We’ve been building as the season goes on,” said Coach Anderson. “I knew as we were getting ready for that tournament that they were ready to play. We’ve had some key players step up, had some great performances.”