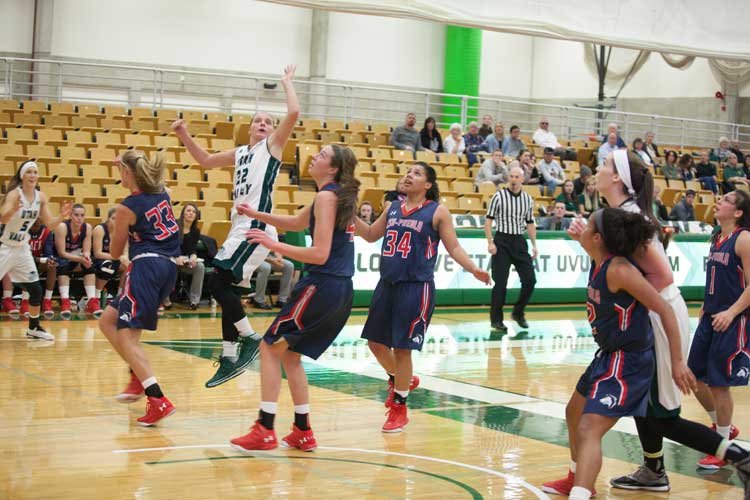 In a game that was close from the starting tip to the final buzzer, the Utah Valley University women’s basketball team emerged victorious over the defending Mountain West Conference tournament champion Boise State Broncos, 72-70 on Thursday night at the Taco Bell Arena.

It was the first road win for the program since January of 2014 and UVU improves to 3-1 on the season.

“We are so excited, this is a big win for us, a landmark win for our program. This is a turning point for our players,” head coach Cathy Nixon said in a statement to wolverine green.com  “For the last couple years we have been in close games, and it has been a point of emphasis for us in the offseason that we would close out these tight games. Our girls really kept their composure through 21 lead changes, and we believed we could win. This is why we did all those drills, so when we were in the situation, that the habits they have created would lead them to success. Tonight we are going to enjoy this one, and we hope to carry this momentum through the next few weeks.”Neither team was able to take control throughout the night, with the largest lead of the night being just nine.  Guard Brooke Pahukoa hit a big 3-point shot with 1:17 left in the game to give Boise State a 70-69 lead.

With just over 20 seconds left in the game, UVU converged on the inbound pass for a big steal and guard Taylor Gordon converted an easy transition layup to take the lead. From there, sophomore guard Mariah Seals lived up to her name, sealing the victory for the Wolverines with a free throw and a block on the potential game-winning 3-point shot from the Broncos.

UVU adequately navigated the Boise State zone defense all night, shooting 42 percent (5-12) from the outside and attacking to get to the free throw line, making 17 of 25 from the charity stripe.  The Wolverines also won the battle of the boards, outrebounding the Broncos 46-38.

The Wolverines will ride this big win into a quick turnaround, returning to UVU to take on in-state foe Dixie State University November 21 in the PE Building.  Tipoff is scheduled for 3 p.m. MT.