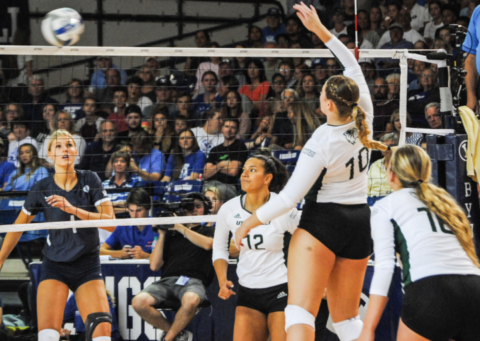 Utah Valley University volleyball ended their two-game road trip this week with yet another loss to a top-tier team in the WAC. They ultimately fell to the University of Texas Rio Grande Valley 3-2 in a highly competitive match.

The loss caused UVU to split the season series with UTRGV, and was also UVU’s fourth loss in the last six games. The Wolverines lost in the fifth set once again, which was their third loss of the season in the final set.

UVU started slowly in the first set. The Vaqueros were in control for the majority of the set, utilizing a 9-4 run to go up to 16-10. The Vaqueros then extended their lead to 24-16 on back-to-back kills and were able to finish off the set.

The fourth set was much closer, each team going back-and-forth with the lead. UTRGV was trailing UVU 17-16 later in the set. Three straight UTRGV kills helped the Vaqueros win five straight serves to regain the lead. The Vaqueros reached set point at 24-19 and ended the set on another kill to tie things up at two games a piece.

UVU got off to a slow start in the fifth set and could never quite recover. The Vaqueros jumped out to a 3-1 lead and extended their lead to 9-6 on a defensive block. UTRGV remained on the attack and closed the door on UVU by a score of 15-8.

Tarawhiti was joined by redshirt junior outside hitter Bailey Christensen who posted 10 kills of her own. Senior middle blocker Jasmine Niutupuivaha and sophomore right back Kaili Downs added eight kills each as well.

UVU now returns to Orem for their last two home games of the season before embarking on a four-game road trip to conclude the regular season. They first take on CSU Bakersfield on Halloween, Thursday, Oct. 31, with the match set to begin at 6 p.m. MST.