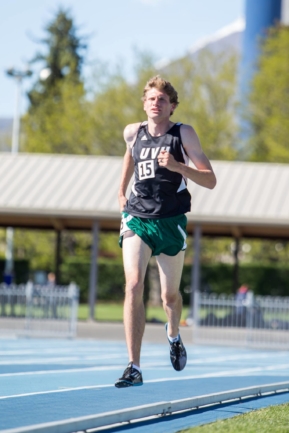 Photo courtesy of Chandler Gubler/UVU Athletics
The 2017 UVU outdoor track and field season was full of conference recognitions and record-breaking performances. The Wolverine men and women’s performance was highlighted by senior distance runner Jason Lynch, who qualified for dual events in the 2017 NCAA West Preliminary competition in Austin, Texas. The regular season culminated in Lynch, along with senior hurdler Cole Eisenhour and junior sprinter Alena Gillespie, who were able to land a spot in the preliminaries.
The three Wolverines will be part of a total of 16 WAC athletes to compete in this meet, which gives UVU the second-most athletes, coming in behind the WAC champion University of Missouri-Kansas City, which has a total of six athletes representing the school.
During the 2017 WAC Outdoor Track and Field Championships, Lynch made NCAA history by becoming the first distance runner to be crowned the conference champion four consecutive times in the 10,000-meter event and as UVU’s all-time record holder in the event. Lynch was also named the WAC champion and new UVU record-holder in the 5,000-meter event. “Jason has made a name for himself in the distance events at the NCAA level. He will be representing UVU in two events, which is pretty tough to do,” said UVU head coach Scott Houle in a statement to WolverineGreen.com. “It shows not only how good of a runner he is, but also how committed and mentally tough he is to qualify in the 10,000-meter and 5,000-meter.”
Senior hurdler Lexi Shaw also came away from this season with her name in the record books for her performance in the 400-meter hurdles during the BYU Cougar Invitational. Shaw finished with a time of 1:00.04, besting her previous record of 1:00.32 which came in the outdoor season opener UNLV Spring Invitational.
As if these achievements weren’t enough, during the week of May 1-7, four UVU athletes swept the WAC Athlete of the Week awards. Leading the pack yet again was Lynch, who shined in the 5,000-meter event at the Oxy Invitational in Los Angeles. Also at the Oxy Invitational, senior McKenzie Preece competed in the 3,000-meter event, finishing in 11th place. Meanwhile, freshman Albert MacArthur took first place in the triple jump at the Weber State Twilight meet. At Weber State, junior Mykah Ouderkirk won the long jump.
Following the preliminary competition, the NCAA season will come to a close starting June 9, during the NCAA Outdoor Championship Finals in Eugene, Oregon, where UVU hopes its star power can shine bright enough to make an appearance.