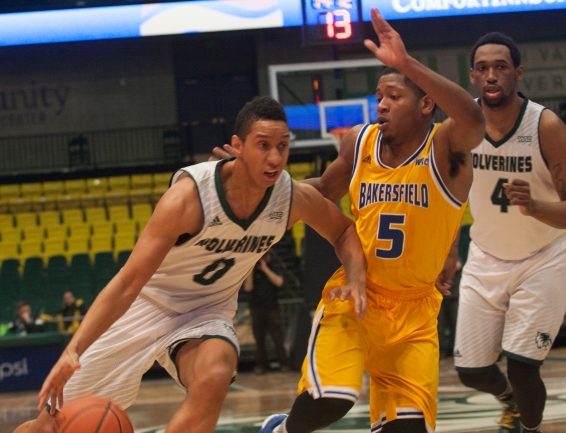 OREM — Marcel Davis scored 22 points on senior day but it wasn’t enough as Josh Braun scored 30 points to lead Grand Canyon to an 86-79 win over UVU in the regular season finale for both teams on Saturday afternoon at the UCCU Center.

UVU had already locked up the 4-seed for the WAC Tournament beginning on Thursday but they wanted to end the regular season on a high note. 3,854 fans watched as UVU and GCU went back and forth in a physical game that saw 55 fouls called and 68 free throws attempted.

“I thought the whistle was really tough tonight,” UVU head coach Mark Pope said. “It was really disappointing. But that’s part of the game, too. It’s one of the factors you have to play with as a team. We didn’t manage that as well as we should have.”

In the final home game for Davis, Cory Cardwell, Alex Carr, Darrious Hamilton, and Jaden Jackson, the Wolverines were at a disadvantage. With a roster depleted by injury and a lack of size, Davis did all he could to keep UVU in the game. He scored 14 of his team-high 22 points in the first half to help the Wolverines keep pace with the ‘Lopes.

UVU jumped out to a quick 9-4 lead in the first half but GCU woke up and found its offensive rhythm. A layup by Keonta Vernon gave the ‘Lopes a 20-18 lead. However, the Wolverines took the lead back just a few minutes later when senior Alex Carr hit a 3-pointer with 7:35 remaining in the half.

But there was a problem and that was Josh Braun. Braun, who is a lock for All-WAC 1st team honors, dropped 17 of his game-high 30 points in the first half to help GCU go into the halftime locker room with a 46-43 lead.

Down by ten points with 13:09 left to play, Davis led UVU on an 8-0 run capped off on a layup by Konner Frey that cut the deficit down to two points with 10:59 to play.

“Bittersweet,” Davis said. “They tell that it goes by fast and you just think you have all this time, but it really goes by fast. I loved playing this year; I love the guys on the team; I love the coaches. They made it a special year for me, and I can’t thank them enough for that.”

Along with Davis, three other Wolverines finished in double digits. Jaden Jackson and Hayden Schenck each had 11 points, respectively and Alex Carr scored a season-high 10 points.

UVU will now look to the WAC tournament where they will face UMKC on Thursday afternoon at 2 p.m. PT in the Orleans Arena in Las Vegas. UVU defeated UMKC in both contests this season but Head Coach Mark Pope knows that the traditional thought of beating a team for the third time in a row is really hard.

“We’re going to go take a giant swing at this. I think the one thing we have in our locker room is we have a deep felt, sincere belief that we can do this.”

Fans that can’t travel to Las Vegas can watch all the WAC tournament games on the WAC Digital Network at www.WACsports.com.