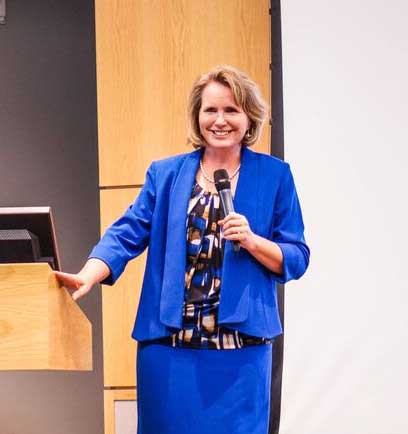 UVU hosted representatives from United Nations Women, the State Department, the Mountain Partnership, the World Bank, local universities and ambassadors from mountain countries (including the ambassadors from Kyrgyzstan, Turkmenistan and Romania) for a conference to discuss the challenges facing women.

The international conference was co-organized by UVU and the International University of Kyrgyzstan. The three-day conference addressed matters such as health, family values, heritage, economic issues, education, human trafficking and leadership. Panel members will draft an agenda documenting their joint efforts to promote gender and sustainable development goals.

During an afternoon session on Oct. 8, UVU Professor Susan R. Madsen reviewed her research into women holding leadership positions. Utah is below the national average, in numbers of women in leadership roles in politics, education, nonprofits and business (for example, the current national average percentage of women serving in state legislatures is 24.2 percent. The percentage of women serving in the Utah Legislature is 16.3 percent). Her Utah Women & Leadership Project has held a number of seminars over the past year to help correct the imbalance.

Morgan Cotti, a researcher at the University of Utah Hinckley Institute, works with the nonpartisan nonprofit Real Women Run to help women get elected to political office. She and her office did research on how women vote, and whether the gender of the candidate running influenced that decision.

In the 2014 Congressional elections, three of the four Utah House of Representatives district races were a female against a male. Two of the females, Luz Escamilla (then-Robles) and Donna McAleer were Democrats running against Republican incumbents and one, Mia Love, was a Republican. In the case of these races, voters (based on information collected from surveys by RWR) didn’t vote along gender lines, but along party lines, as could be expected. Love won, while McAleer and Escamilla each lost.

BYU adjunct instructor and humanitarian Melissa Sevy displayed how difficult it is to accurately measure impact. Her organization, Musana, gives Uganadan women the opportunity to make jewelry and sell them through the Musana platform because jobs for women in Uganda are sparse. For the next few years, she returned to survey her artisans and report on how their lives have improved. Each year, she found a different obstacle that obscured the results: in 2012, findings were based on nonconcrete aspects, like confidence (which is not only difficult to measure, but difficult to prove wouldn’t have happened with no interference); in 2014, there was a conspiracy among some artisans to report conditions as worse than they were, in hopes they’d be given a raise.

On the final afternoon, attendees to the conference were also invited to visit a Habitat for Humanity site to help construct a house.

This is the third time a Utah location has hosted; the past two years, the summit was held in Rio de Janiero and Peru.