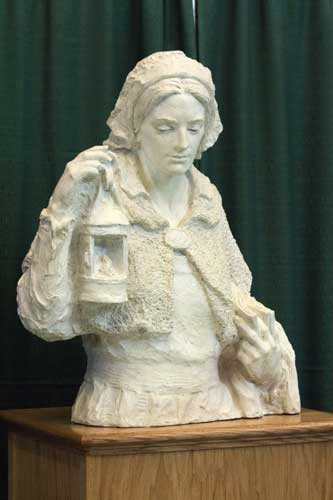 The Lady with the Lamp, a statue of the famed nurse Florence Nightingale that was sculpted by 20th-century artist Avard Fairbanks, was donated by his son Jonathan Fairbanks to the UVU nursing program and will now sit in the main hall of the HP building. The statue was unveiled at a ceremony Sept. 22.

At the ceremony, Intermountain Healthcare’s vice president of nursing, Kim Henrichsen, publicly announced the new IHC Scholarship for Diversity. IHC has donated $100,000 for nursing students who come from diverse backgrounds. That scholarship will cover full tuition for qualifying students over the next several years.

“We have hired and employed many, many, many graduates from UVU nursing programs,” Henrichsen said while announcing the donation.

British-born Florence Nightingale’s stake in history comes from advancing as a nurse in the Crimean War, where she improved sanitary conditions and later inspired healthcare reform around the globe.

Avard Fairbanks, the sculptor, is perhaps most famous for sculpting the original Angel Moroni that now sits atop the Salt Lake Temple.

His grandson, Daniel Fairbanks, is currently dean of UVU’s College of Science and Health and accepted the statue on behalf of the school. He shared the life story of Nightingale while sculpting her face with raw clay in real time during the ceremony.

UVU President Matthew Holland also attended the ceremony, where he spoke of the nursing school’s beginnings when UVU was still Utah Vocational School, and how well timed the statue donation is, with the advancement the university is attempting to make in the art world.

“This year is something of a theme of art for us. We’re trying to get an arts building,” he said. “We’ve talked about how central the arts are to the university experience, and so I know what it means to the Fairbanks and to me to be combining the best of the arts and the sciences together with this display.”

He also thanked IHC for their donation and half-joked that he looks forward “to many more in the future.”

“As we looked at our patient needs, many of them come from diverse backgrounds. We wanted to have nurses who understood different cultures and speak different languages and have a cultural understanding of our patients,” she said.

The first recipients of the scholarships, announced at the ceremony, are Brooke Fonohema, Heber Hoil and Ella Mateaki.

The ceremony also included a violin solo by Donna Fairbanks, Daniel’s wife and chair of UVU’s department of music. Following the ceremony, tours of the nursing department’s simulation labs were held.