Modern heroes at the Covey Center 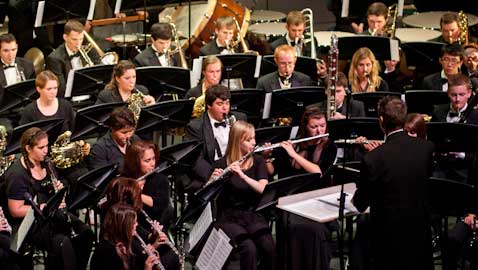 UVU Wind Symphony brings in a good crowd, even on a Tuesday

Children, grandparents, adults and teens filled the Covey Center’s red-carpeted foyer as they waited to enter the concert hall. Once inside, audience chatter, accompanied by the sounds of musicians warming up, rose toward the vaulted ceiling. The chatter faded as the lights dimmed and applause took hold as the conductor took the stage.

The UVU Wind Symphony, conducted and directed by Dr. James Colonna with special guest pianist Dr. Hilary Demske, played at the Covey Center for the Arts Tuesday, Oct. 4 in the symphony’s first concert of the semester. The show, entitled “Heroes of the Modern Era” began at 7:30 p.m. and featured four musical pieces all complimenting the final piece, The Star Wars Suite.

The show brought in a crowd of at least one hundred people. Each piece was met with applause and often with whistling and hooting. The Star Wars Suite even earned a partial standing ovation.

The first piece, The Ronald Searle Suite, was a special performance because, as Colonna announced, it was the first time the piece had been played live in over two decades. Those in attendance were the first audience in Utah to ever hear the piece performed. The suite, by composer Lyn Murray, was written to accompany a 1957 cartoon film about the history of energy. The dynamic piece showcased each instrument’s sounds, often in quirky and unexpected ways.

After the first number, played by a small group of musicians, the lights came on during a brief intermission and brought the full symphony to the stage. The lights dimmed again and the symphony then played Firefly, a dynamic piece by Ryan George inspired by the vivid imagination of George’s daughter.

The next piece was a favorite of fans of The Man of Steel and non-enthusiasts alike: The Red Cape Tango, part of a Michael Daugherty symphony inspired by Superman’s death. Adding an extra surprise, the symphony placed one French horn player up in the balcony with the audience. This player, along with another French horn player on stage, began the piece with what seemed to be a musical conversation floating across the entire theater. The energy subsequently began to build as the Tango rhythm took hold, introducing a dramatic sequence with one part consisting almost entirely of cymbals. At the end, all the trumpet and French horn players stood to sound the closing bars.

Finally, the moment everyone was waiting for arrived. John Williams’s The Star Wars Suite began with the familiar Imperial March. The symphony continued through the gentler Princess Leia theme and two other pieces, closing with the well-known Main Theme. As a new twist, the suite was accompanied by a slideshow of shots from the Star Wars films, paying homage to the cinematic roots of the music. As Colonna brought the symphony to silence, the applause began and, one by one, many of the audience members stood in ovation. After the show, attendees lingered in the theater talking and meeting with members of the symphony.

Fred Gummow of Orem, who came to see his granddaughter play, was impressed by the difficult pieces and said the show was different than anything he had heard before. Kresten Erickson, a high school student from Eagle Mountain and Nikki Wells, a student from Utah State University also enjoyed the show and both agreed that The Star Wars Suite was one of their favorite parts. Heather, Katie and Stephanie Morley, ages 9, 13 and 15, respectively, were also pleased with the show and came to support their mother who plays flute in the symphony. Stephanie said she liked the way the players “meshed together.”

Keep an eye out for the symphony’s next concert later this semester and for their many concerts coming in the spring.