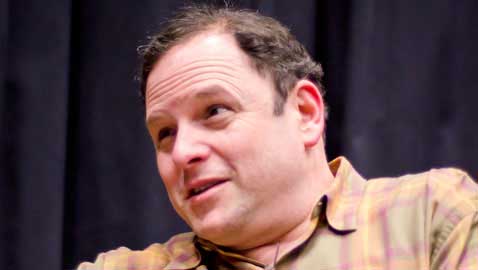 Trying his hand at teaching, Jason Alexander came to UVU to teach workshops on theater performance.

Actor on stage, television and film, director, producer and comedian, Jason Alexander took on a new role of teacher when he came to campus on Feb. 27-29. Best known for his role of George Costanza on the television show “Seinfeld,” Alexander’s resume also boasts of work in film, voice acting and stage performance, including singing and dancing on Broadway. In 1989, Alexander won a Best Actor in a Musical Tony Award for his role in “Jerome Robbins’ Broadway.”

Through Traci Hainsworth, Manager of the School of the Arts, Alexander was invited to teach the acting workshops. UVUSA also hosted an evening with Alexander that had over 300 in attendance. The UVU Review was able to have a personal interview with Alexander, where he explained more about why he came to campus.

How did the idea of you coming to UVU to teach these workshops come about?

It was Traci. I’ve done a lot of teaching, a lot of master’s classes and I’ve done several in the past for an organization in Los Angeles called AIA that Traci was a part of. And I must have impressed her. So when she called and said, “Hey, remember me? We used to do this over there,” and explained to me how the university is trying to build and the program is trying to build, I said, “Yeah, that sounds great.” It’d be too much to call it a plan but I do see myself having teaching become a significant part of my life down the road. So it’s as much of a learning experience for me as it is for anyone else.

Is this your first time in Utah?

No. I learned to ski in Utah. I come here every year and break my shoulder every year.

So what are you focusing on in these workshops?

Almost every acting teacher I’ve ever met and every acting program I’ve ever met is really good at teaching the tools in an actor’s craft. What they are not necessarily focused on is giving a student a method by which to use those tools every time. And the result is when you give even a trained actor a piece of material, they’re not quite sure what they’re supposed to do with it. What I stumbled upon in my training was an absolute methodology and I’m really trying to give them the methodology that has served me throughout my career. It’s not easy, but it’s also not alien to what they have been learning. It involves everything they have been learning and just asks things of them that they might not normally think about.

What do you enjoy most about teaching? Like you said, you want to do it more.

There is a thrill to seeing a young artist of serious intent have that break through moment, where their work just goes from one level to another level because they have that “Ah-ha!” It is as thrilling to be present at that moment – especially if I’ve done anything to help engender it – as it is to have a fantastic opening night. It’s just life affirming. It makes me feel like all the stuff I’ve been doing has a purpose because it’s passing on to another generation I guess in this case. But it can also just be, I’ve thought of people older than me that I’m like, “Oo! I got them this thing before, even before they walked away from it all.”

Have you taught at any other universities?

Is this your first one in Utah?

Throughout your career you’ve done theater acting, you’ve done film and musicals, you’ve done voice acting, directed and produced. Which one do you think you enjoy the most?

I’m beginning to enjoy directing more than acting but that’s only because of the kind of acting I’ve had to do most of the time. The directing is far more compelling. And I do love directing anyway. On the acting side, it’s hard to say which is the most rewarding because they are actually all very different and they all have pros and cons. The pro to anything with a camera is it tends to be a new experience everyday. You’re not often called upon to repeat the material and so there is literally a new challenge every day. The con of it is you tend to do the work in very small dollops and you’re not ultimately in charge of what the audience sees. And for someone who invests a lot in the “how” of what you’re doing, to have that “how” monkeyed with – even when it’s monkeyed with to your benefit – is a little disconcerting. So at the end of the day, even though theater is the most grueling, the most taxing, the most frightening, it is also the most rewarding because you have to have consummate skills to do it well and you know that when that curtain goes up, it’s you. It’s you and the audience. And no matter what the director said, the writer said, no matter what you rehearsed, no matter what, what, what, what, what, it’s you that is going to make or break that experience and that illusion for that audience. And that’s a thrill.

Do you have any upcoming projects that you’re working on?

Yes and no. I always have things in development and I hate saying that cause it’s such a lame thing to say. I have a couple of my own one-person performance shows that I do for corporate and I have things I do in Vegas. And I’ve got TV projects in development. I have theater projects in development. And I have the occasional film in development. I’m not a film force so it’s going to be harder for me to get going. But, yeah, there’s always stuff there. But it’s a changing, right now I think the business is radically changing and the people who run it are radically changing and what they need, want and how they put it out there, it’s all in flux. So the guys who are much better at this than me, they’re scratching their heads and saying, “I don’t know how we do this.” And I’m kind of waiting for them to figure it out so I can sort of follow in their footsteps.