Bastille brings the storm back to Utah 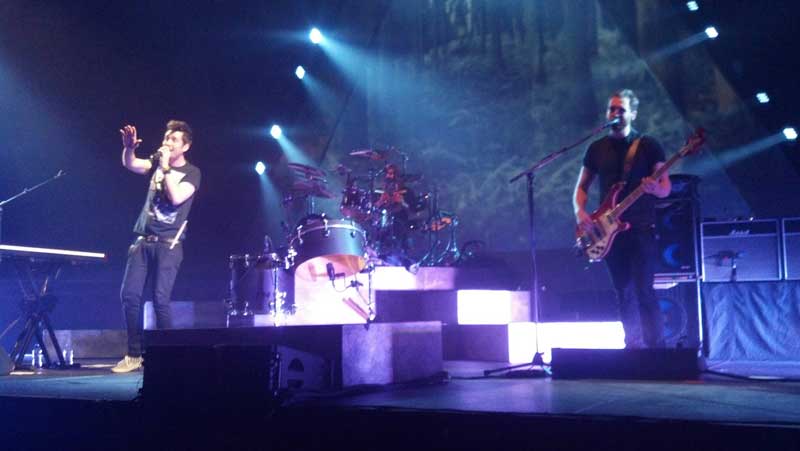 Bastille returned to Utah on Tuesday November 11th, armed with a killer music set, several lights and lasers, a giant triangular video screen, and singer/song writer Ella Eyre. Bastille came to Utah for the first time last year in December as part of X96’s Nightmare Before Xmas concert. Since then, their fan-base has grown significantly, producing a massive turnout for Tuesday’s concert. Utah “Stormers” (The nickname for Bastille fans) were thrilled to find that Utah earned a spot on the band’s Bad Blood: The Last Stand tour.

Fans lined the cold sidewalks for hours, hoping for an optimal spot on the General Admission Floor. When the doors opened, people rushed inside and raced down the stairs into the UCCU Center. Once the floor and surrounding seats were packed, the lights went out and screams erupted as Ella Eyre’s logo appeared on screen.

Ella Eyre is a rising star in the music world. The 20-year-old Brit only began writing music three years ago, but is quickly working her way to the top. Her music set at the concert consisted of songs from her new EP that was recently released in the U.S., including her latest single Comeback. Though many of the fans were not very familiar with Ella Eyre and her music, the audience was loud and on their feet as she performed.

The crowd buzzed with excitement as the stage transitioned from the opening act to the main event. With fog and lasers going, and scenes from the music video playing behind them, Bastille opened with the second song on their Bad Blood album, Things We Lost to the Fire. The crowd cheered in excitement as the Bastille went on to play more fan favorites from their Bad Blood album, accompanied by a colorful laser show.

After a few old hits like Laura Palmer and Weight of Living pt. II, the band performed a song titled Blame from their new album which according to frontman Dan Smith will be coming out next year some time.

Bastille also performed a song called The Driver which they recorded as part of BBC Radio 1’s rescoring of the 2011 Ryan Gosling film, Drive. The Driver and several other new songs will be featured on Bastille’s latest mixtape, VS (Other People’s Heartache pt III), due to be released on December 8th.

After performing their new songs, the band surprised the audience by bringing Ella Eyre out to perform a duet with Smith for Bastille’s popular cover of TLC’s No Scrubs. This collaboration was featured on one of Bastille’s previous mixtapes, Other People’s Heartache pt II, three years ago. Dan explained that the mixtapes have been taken off the internet due to various legal reasons, but encouraged fans to look through the “less legal parts of the internet” to find them.

The band finished their set with Flaws, a fan favorite. In accordance with Bastille tradition, Smith put on his jacket and pushed his way through the audience as he sang. The audience erupted into screams and cheers as the band left the stage and the lights went out. A few loud minutes later, Bastille reappeared, immediately starting into a lesser known track on their album, Get Home.

After the cheers quieted, Dan asked everyone to jump with him as he sang the last two songs of the night. The band went on to perform one of the most popular songs from their mixtapes, Of The Night, and then invited Ella Eyre and her band to help them perform their most well-known, Pompeii. Everyone in the room sang along and jumped with arms high in the air.

The concert was definitely worth the cold hours spent outside waiting. As usual, Bastille put on an amazing show. The band said they hoped to return to Utah on their next tour. There will be plenty of music-hungry “Stormers” waiting for them.