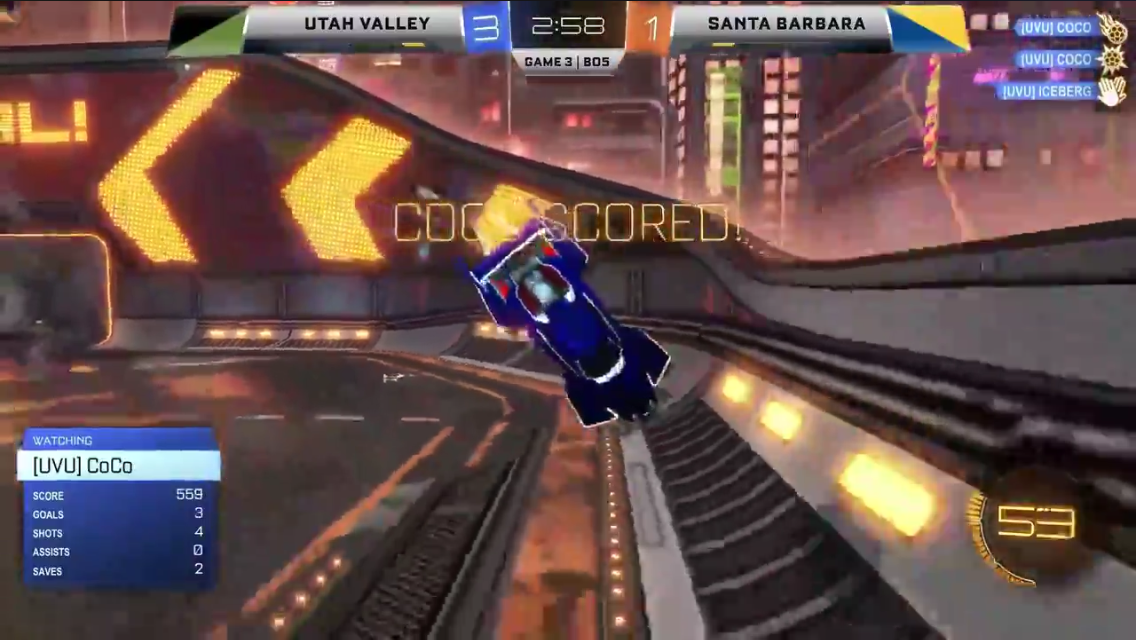 UVU made their first appearance in the Collegiate Rocket League Tournament on Feb. 26-27, seeking out a potential $50,000 in scholarship money should they take home the grand prize. Unfortunately, the players IceBerg, CoCo and Mojo did not bring home the grand prize, but they did make it to the top four in the Western Qualifying Bracket, eventually losing to the Arizona Wildcats.

In case you are unfamiliar with eSports, Rocket League is basically soccer with rocket cars.

The tournament started for UVU against the Cal State Santa Barbara Gauchos in a best-of-five series. The Wolverines had 72 percent of the fan vote going into the first series. After going down 1-0 Mojo brought it back to even on a goal assisted by CoCo. With three seconds left in the first game, CoCo scored to secure the first game for UVU.

The second game went to the Gauchos 2-0. UVU came back and took the third game on three goals by CoCo, two of which IceBerg assisted on. The Wolverines lost the fourth game in overtime 3-2, forcing the fifth game. UVU would dominate possession in the fifth game and win 2-0.

Having beaten the Gauchos, UVU would move on to face Cal Poly Pomona in another best of five series. They showed up in the Twitch chat once again with a fan number of over 70 percent.

The series started on a down note with a 4-3 loss in which each of UVU’s players scored a goal. UVU came right back and took a good win 3-1.

UVU’s far-fetched journey to the semi-finals was complete, up against last year’s national champions: the Arizona Wildcats. UVU showed up in force in the chat once again, propelling their fan number to 73 percent. UVU would now be ready to take on the Wildcats in a best-of-seven series.

The Wildcats struck quickly in the first game, but CoCo came back with two quick goals to put UVU up 2-1. The Wildcats evened it up before technical difficulties delayed the match. Once the match was resumed Arizona scored a third and held the lead to the end.

The third game Arizona shut out UVU 3-0. In the fourth game, CoCo scored off the opening kickoff for UVU, but they were unable to put anything else together while Arizona found the back of the net three times to end UVU’s tournament with a 3-1 game win and a 4-0 sweep for the series.

UVU may not have taken the prize this year, but they made a name for themselves as a team to be reckoned with in the future. The fanbase showed up in force to support. There’s not much more than you could ask for in the first year.