What do LDS members do on their two-year missions? 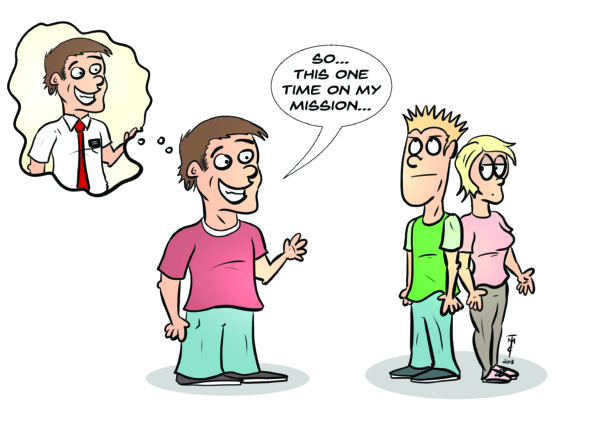 We’ve all heard “When I was on my mission…” in a classroom before. The eyes immediately begin to roll or chuckling comes from others who have either served an LDS mission or can’t help but laugh at the repetitive verse. For those who aren’t of the LDS faith, you may wonder why these former missionaries share so many stories from their missions. Better yet, you may wonder what exactly did they do on those missions.

Caden Kirkland, an accounting major who recently returned from his mission in Paraguay, says that one of the main things missionaries did on his mission was talk to people about the message that families can be together forever beyond death.

During the time members of the LDS church are out on their missions, they live a highly structured schedule Starting the day at 6:30 to 10 a.m. everyday, missionaries have time for a quick workout, personal study, companionship study and language for those in a non-English speaking country. The rest of the day is filled with meetings, talking to people in an assigned area, knocking on millions of doors and so much more.

The latest statistics from the LDS church show that 70,496 missionaries are currently in over 400 missions worldwide. Missionaries do not choose where they go for their mission and provide the funds from their own pocket or sometimes through family help. An article from The Church of Jesus Christ Newsroom states that “missionaries receive their assignment from Church headquarters and are sent only to countries where governments allow the Church to operate.”

With so many missionaries serving throughout the world, many of them from Utah, anyone is bound to hear “mission stories” in a class or two.

Communication major Lauren Ashton, who isn’t a member of the LDS church, understands the sacrifice of those who go on missions but thinks that when they do share stories about their missions, they could do so in a better way.

“They could phrase [their experiences] differently,” Ashton says. “I think sometimes they talk as if they are on higher [spiritually] than others because they had that experience. Not all of them are that way but I know sometimes there are those who act like they are.”

These missions are a personal sacrifice for each missionary. They leave their family, friends and personal life behind for two years for men and 18 months for women. The only contact they have with home is through email once a week and two phone calls on Christmas and Mother’s Day.

“My whole life I felt I was a blessed with something special and I wanted to share that gift with others,” Kirkland said. “I was blessed with [the faith] that family ties last forever.”